Reginald John Smith passed away peacefully at home on March 21, 2020, aged 92 years. Reg will be fondly remembered by many colleagues and friends as a kind, considerate man who always had a smile on his face and a kind word for all.

His knowledge on all matters metrological, especially average weight, was well known and led to him being the Institute’s expert, main speaker and Government liaison officer on the topic. Reg will also be remembered for his presentations at Branch meetings, industrial organisations and other professional bodies in many places across the UK. He also had considerable expertise in the areas of Petroleum and Explosives storage and handling. 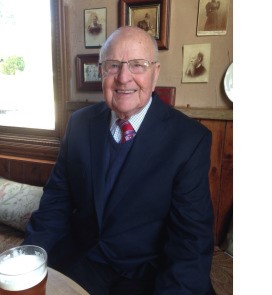 In 1981 at the Harrogate Conference Reg was awarded a well-earned Fellowship, and in his citation, it mentions that he was, of course, a Yorkshireman born and bred, where he trained at what was then the East Riding County Council at Beverley. On qualification, he moved to the Hull City Office. He joined the Yorkshire branch where he served on the branch executive from 1963 and was Branch Chairman in 1971. In 1974 he became the Branch Representative and served on the Institute’s metrology committee, eventually becoming its Chairman. Reg then worked in the newly formed Humberside authority for most of his life.

Reg was also very committed to training members of the Institute, and in 1984 he was elected as our national Chairman and held his annual conference at Inverness in 1985.

His hobbies included being an amateur entertainer and painting in oils, as well as brewing homemade wine which made staff Christmas parties at the Hull office go with a swing. Reg also had a collection of old standard measures, including wooden ones and petroleum measures. These items came from the old Hull office which he rescued from a skip when the office was being closed in the 1980s.

Tributes to Reg have been paid by many of his colleagues. Here are just a few:

“I have fond memories of working with Reg during my time in Humberside.”

“Reg’s distinctive Hull accent will long remain a memory as will his leadership and the respect in which he was held by his colleagues.”

“His service to the Institute Council was exemplary, culminating of course in his Chairmanship in 1984-85 and Conference in Inverness. Reg was delighted to have persuaded Lord Mackay of Clashfern, Lord Advocate, who later became Lord Chancellor, to speak at the conference.”

“He was a ‘gradely lad’, and I had many happy times with him at Institute Committee’s, Council Meetings, Conferences, and LACOTS.”

“Reg made a big impression on me because he was such a likeable character. At meetings, he was in his element, and always seemed to know what to say and when to say it. His strong voice and unmistakable accent meant that he was an easy speaker to listen to. His opinion was always relevant and therefore taken notice of. Reg was immaculately turned out and always wore a smart suit. On many occasions, when he needed to wear a chain of office, he made it look as though it had been made just for him. He would always make time to speak to anyone and was the perfect host. He could make even the younger members feel comfortable enough to ask questions in Branch meetings in order to learn. No wonder he was so popular and well-liked throughout the service.”

“I never saw him without a smile on his face and he was always pleased to see me and to come and talk with me. He took great delight in talking with the younger members of the profession. He always made everyone feel welcome at Branch meetings and endeavoured to ensure that they were included in all proceedings. The Branch meetings in those days were more formal than today and seemed perhaps to be dominated by older members, quite daunting at times for a young man. He unfailing gave his help, made me feel at ease, and was only too willing to discuss any issue which was current at the time.”

From a personal point of view, I have much to thank him for. His enthusiasm seemed to inspire me (as I am sure it did others), and I have never forgotten the valuable and lasting contribution that he made to my career. Reg was a lovely gentleman, and I have fond memories of him.

Reg was laid to rest at Haltemprice Crematorium, Willerby, Hull at 08.20 on Thursday 2nd April. The words from the family were “Reunited with his beloved wife Kay, much-loved dad of Richard and Janet, grandad and great-grandad and friend of many”. The family plans a Celebration Memoriam at a later date to celebrate the life this very special man.

We send our sincere condolences to his son Richard and daughter Janet and their families.

Compiled by Chris Armstrong from the contributions of colleagues.