After a very short illness, Dennis Arthur Hadden Wilce passed away in his sleep in the Queens Medical Centre, Nottingham on January 8 2021, at the age of 98.

Born on September 14 1922, Dennis lived in the Meadows in Nottingham. His dad was an engine driver in the days of steam trains – one Sunday school outing was a particularly proud moment for him, as the shout went up that “Wilce’s dad is driving the train!”

Dennis passed the 11-plus and went to Mundella Grammar School, where he performed well academically. On leaving school he joined the Weights and Measures Department of Nottingham City Council (now Trading Standards) in January 1940 as a junior clerk. 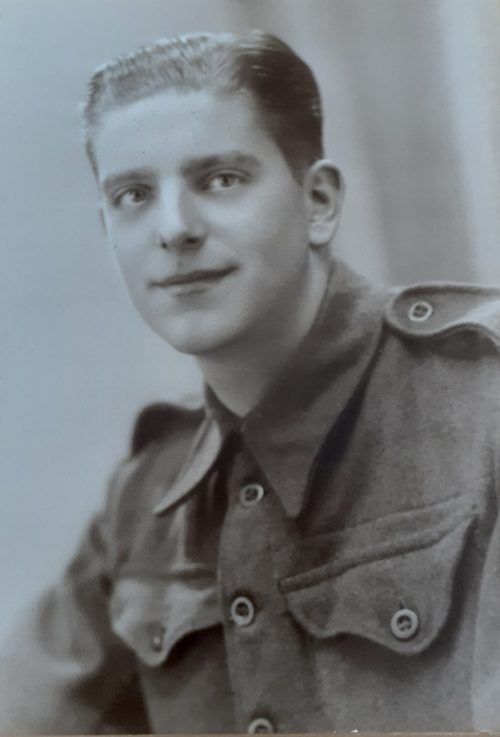 Dennis during his time in the army

Shortly afterwards however, with the Second World War under way, Dennis was called up to the army. Having proved his proficiency in literacy and numeracy, he was assigned to clerical duties and was responsible for making sure that all sorts of items got to the correct places. He was stationed in Cairo for much of the war and at its end, when he was waiting to be demobbed, he made the most of the chance to visit the pyramids and other wonders of the area.

After the war Dennis returned to the office and worked through various exams, eventually rising to Senior Inspector level.

In 1955 he took up a post in South Shields for three years, returning to Nottingham City Council in 1958, where he spent the rest of his working life until taking early retirement in 1980.

He would occasionally talk about the cases he was asked to investigate, such as when a piece of fish was sent to the office in the Christmas post with a note saying “this fish was off when I bought it” – well it certainly was by the time it reached the office!

Dennis enjoyed retirement for 40 years, a period as long as his working life. He was a member of The National and Local Government Officers’ Association, both when working and as a retired member, and often represented his local branch at national conferences.

Dennis was an active member of St Faith’s Church in the Meadows, Nottingham. He sang in the choir and was a warden there for many years. A few years after the war Jean Clark, who had been at school with him, returned to Nottingham to help look after her dad who had suffered a stroke. One day she came to the church and on seeing Dennis, said “well if it isn’t old Wilce”. They started courting and in July 1953 they married, moving in with Jean’s mother for the first two years of married life. They were both keen to have children and Elaine, Margaret (Maggi) and Elizabeth (Liz) followed.

Dennis had a great interest in theatre and opera which lasted throughout his life, as did his support of Nottingham Forest Football Club. He also enjoyed going to Trent Bridge to see the cricket and watched lots of other sport on TV. He developed an interest in cemeteries, especially Highgate, fascinated by the lives of famous people buried there, and gave talks about Highgate Cemetery to various groups. His memory for people and places was legendary and in later life one of the carers at Westdale Care Home nicknamed him “Ceefax”.

When St Faith’s Church closed he became a more regular member of St Paul’s Church in West Bridgford, where Jean ran the Sunday school and he played the organ for the children. He liked to improvise and one day during the Sunday school lesson he was playing a tune a la religioso. When one of the young boys said to Jean, “Is Mr Wilce playing Lilly the Pink?” she replied, “I wouldn’t be a bit surprised”. He went on to play an even more active part in the life of the church as warden for many years and was delighted to be presented with a medal for 50 years of church choir singing by the Bishop in Southwell Minster. 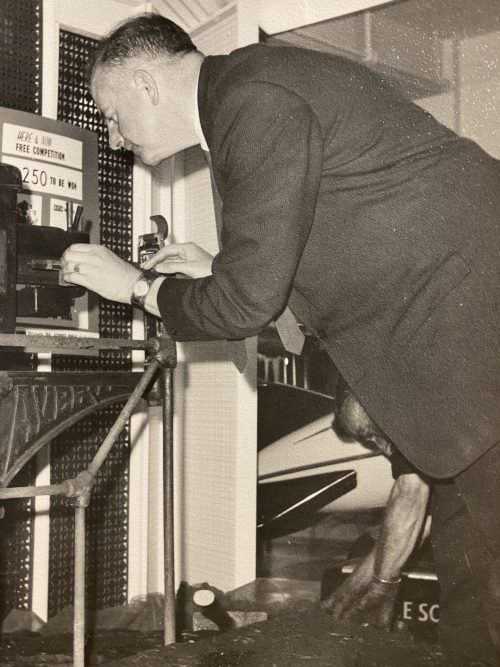 Favourite family summer holidays were spent at the YMCA Holiday Centre at Rhyl in North Wales. There were always community activities organised and twice a week there would be dancing in the lounge. Dennis always joined in and one dance, The Saint Bernard Waltz, stands out in his daughter’s memory. To the amusement of everyone else but the embarrassment of his teenage daughter, after the two side steps he would accompany the foot stamp with a loud “woof woof”.

Grandchildren Jenny, Laura, Martxel, Alex and Kieran came along, and later there were great-grandchildren Archie and Anya. He used to enjoy entertaining the children with tales of laughing dragons – when out on walks he would disappear and an ominous laugh would erupt from behind a bush.

When Jean died at the early age of 70 Dennis found life a struggle, but his love of company and the support of neighbours and good friends from church helped him through. In early 2006 he decided that moving to a care home would improve his quality of life and having visited Westdale decided this was the one for him. He never regretted this move and was very happy there for nearly 15 years – he regularly told people, including the Care Quality Commission Inspector, to “put your name down for it”.  He joined in every activity going and often played the piano for singalongs. Many people were treated to cards he made in the craft classes, complete with one of his jokey verses.

“Did I tell you the one about…” is a phrase everyone who knew him will remember, as he always had several jokes up his sleeve and was always keen to share them. He even wrote a couple of joke books which helped raise money for St Paul’s boiler appeal.

He enjoyed good health until 1989, when he suffered his first heart attack. A few years later he survived a second heart attack and in 2007 confounded the doctors by pulling through after a ruptured bowel and going on to have many more years of quality life in Westdale despite failing eyesight and mobility issues.

All he needed in later life was a TV to watch sport and his favourite programmes, company and regular meals. Towards the end of 2020 when asked if he was bored due to so many of the regular activities at Westdale being curtailed he seemed surprised and said, “Oh no, I’m never bored”.

Recently he rang each of his daughters to say “If anything happens to me during these strange times you mustn’t worry. I have had a very good life and been very happy”.