Three volunteers who have tackled scams in Buckinghamshire and Surrey have been rewarded for their efforts with a CTSI Hero Award.

Volunteers like Geoff, Geoffrey and Karen are worth their weight in gold. If it weren’t for their dedication and commitment to helping others in the fight against the scammers, our communities would be much the poorer

A life-long volunteer, a wounded veteran and a neighbourhood watch legend who tirelessly dedicate their free time to raise awareness and protect their communities from scams have each received the Chartered Trading Standards Institute (CTSI) Brian Smith Hero Award.

Described as the ‘father’ of Buckinghamshire and Surrey Trading Standards Volunteers, 88-year-old Geoffrey Boswell, has worked as a Scam Marshall and Community Champion for the last five years. Carer for a relative who’d been caught in a scam, Geoffrey uses his personal experience to help vulnerable and socially isolated people to recover from their ordeals. He is seen as the ‘eyes and ears’ of his community, running ‘Friends Against Scams’ sessions as a SCAMchampion and assisting trading standards with test purchasing and food allergen work. 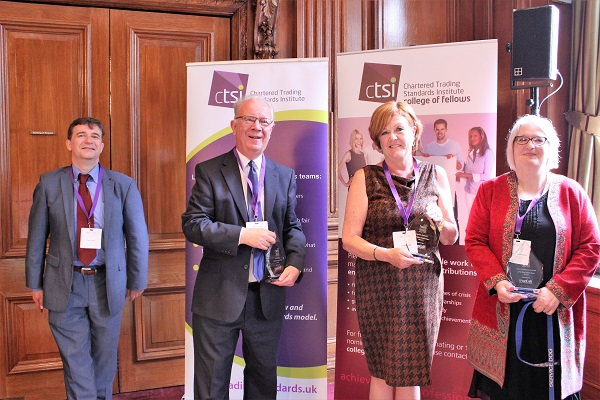 Likewise, wounded veteran Karen Holdsworth-Cannon, one of the first to be trained as a SCAMchampion, passes on her knowledge to thousands of ‘Friends Against Scams’ community-based organisations and local business groups. She has appeared on BBC’s Rip Off Britain, and runs a radio show on Surrey Hills Radio, where she promotes scams awareness and the work of trading standards.

In addition to running one of the largest Neighbourhood Watch schemes in the county, Geoff volunteers his time with Bucks and Surrey Trading Standards as a SCAMchampion, working with local care homes and community groups.

The CTSI Hero Awards celebrate those who make outstanding contributions towards consumer protection in our communities. The above received the CTSI Brian Smith Hero Award at a special ceremony at One Great George Street, London, on Tuesday June 25.

Chief Executive at CTSI, Leon Livermore, said: “The CTSI Brian Smith Hero Award gives us the chance to celebrate individuals in the community who make a real difference to people lives. The Bucks and Surrey SCAMchampions epitomise everything we’re looking for and I’m honoured to award Geoffrey, Karen and Geoff today.”

Cllr Denise Turner-Stewart, Surrey County Council Cabinet Member for Community Safety, Fire & Resilience, said: “I would like to congratulate Karen Holdsworth-Cannon for receiving this award and thank her for giving up her time to protect the most vulnerable people in Surrey from scams. People like Karen, and the SCAMchampions, make a real difference to our communities as we can share more scams prevention advice and help to prevent our residents from being ripped off.”

Gareth Williams, Buckinghamshire County Council Cabinet Member for Community Engagement and Public Health, said: “Volunteers like Geoff, Geoffrey and Karen are worth their weight in gold. If it weren’t for their dedication and commitment to helping others in the fight against the scammers, our communities would be much the poorer. I applaud their success.”

Karen and Geoff were presented with their award by Steve Baker MP and Steve Smith, Director of trueCall, who sponsored this year’s CTSI Brian Smith Hero Award category. Unfortunately, Geoffrey was unable to make the event, and his award was collected by a representative from Bucks and Surrey Trading Standards.

The CTSI Brian Smith Hero Award is named in honour of the late Brian Smith, a CTSI Lead Officer who sadly passed away in 2017.