A worrying uptick in the use of vaping products among young people, many of them using illicit and potentially dangerous devices, has sparked concern among Trading Standards and healthcare professionals.

The disposable vapes that have surged in popularity over the last year are brightly coloured pocket-sized products with sweet flavours and sweet names, and are widely available for under a fiver; no wonder they’re attractive to children

Trading Standards teams across the country are ramping up investigations into potentially unsafe vaping products, as usage of the devices – particularly among young people – surges.

An operation carried out by Staffordshire Trading Standards has resulted in the seizure of more than 3,500 illegal vaping products with a street value of £27,000 since April 2022 alone.

In London, Trading Standards Officers from the Royal Borough of Kensington and Chelsea have recently seized around 3,000 illegal vaping devices. Many of the products taken off the market – with flavours such as ‘strawberry ice cream’ and ‘peach mango guava’ displayed US health warnings in place of UK labelling. Most of them contained more than the legally permitted amount of nicotine, and were possibly smuggled into the UK after being banned in the US. 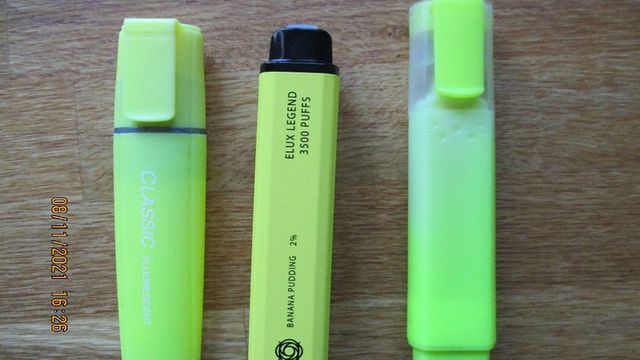 The spike in usage of vaping products among young people was revealed in a recent survey by campaign group ASH, which shows that almost one third of 16 and 17-year-olds have tried vaping, with 14% currently vaping regularly. Among 11-17-year-olds, 7% are vaping – an increase of 4% since 2020.

Teachers have also reported a rise in vaping among their pupils according to the BBC, with more than half catching a pupil using a vape.

The health risks of vaping among young people can be serious. Last month an 11-year-old girl in Great Yarmouth was rushed to hospital after using an illegal vaping product. Her mother, Holly Smith, is calling for greater action to be taken to combat under-age sales of the products, which can cause “unexpected harm”.

Norfolk County Council Trading Standards says it has received six complaints since April about under-age sales of vaping products in Great Yarmouth – three relating to the same trader. Earlier this year Trading Standards Officers found thousands of illicit vaping devices across the county, some designed to look like highlighter pens so as to specifically appeal to children.

Deborah Arnott, Chief Executive of ASH, said: “The disposable vapes that have surged in popularity over the last year are brightly coloured pocket-sized products with sweet flavours and sweet names, and are widely available for under a fiver; no wonder they’re attractive to children.

“As the Khan Review recommended to government, an additional £15m needs to be invested in enforcement, and this should include vaping as well as tobacco products. The laws also need strengthening to prohibit child-friendly packaging and labelling of vaping products and to prevent promotion on social media. But online platforms like TikTok don’t need to wait, they must act now. The flood of glamorous promotion of vaping on social media is completely inappropriate and social media platforms should take responsibility and turn off the tap.”

According to Medicines and Healthcare products Regulatory Agency (MHRA) specifications, the maximum legal tank size for a vaping device is 2ml, with a maximum nicotine strength of 20mg/ml (or 2%). The largest legal size for a vaping refill bottle is 10ml. Any products exceeding any of those specifications should not be available on the UK market, and may present a health risk.

Victoria Wilson, cabinet member responsible for Trading Standards at Staffordshire County Council said: “Vapes and e-cigarettes are becoming more popular as an alternative to cigarettes but as this increases so does the frequency of illegal and counterfeit products.

“These products come in a variety of shapes and sizes, and a worrying trend Trading Standards are seeing is that the products are becoming more popular with children, with increasing numbers trying them.”