An event in Westminster has raised the profile of the dangers posed by button batteries.

Members of Parliament, industry leaders and child protection experts gathered in Westminster yesterday (June 7) to sign a pledge to raise awareness of the risks associated with button and coin cell battery ingestion.

The event coincided with Child Safety Week (June 6-12) and marked the founding of the Harper-Lee Foundation in remembrance of two-year-old Harper-Lee Fanthorpe, who died after swallowing a button battery in May last year.

The charity was set up by Harper-Lee’s mother, Stacy-Marie Nicklin, to provide a lasting legacy for her daughter and campaign to prevent similar deaths. It is Chaired by Jo Gideon MP, who hosted the event.

Michelle McKenna, Senior Trading Standards Officer at North Lanarkshire Council, was in attendance. McKenna has been instrumental in the introduction of a safety standard designed to protect children from the dangers of button batteries, and is a vocal supporter of child safety initiatives. “The event brought awareness to the issue and asked everyone who attended to sign a pledge to recognise the hazards of button and coin batteries,” she said. 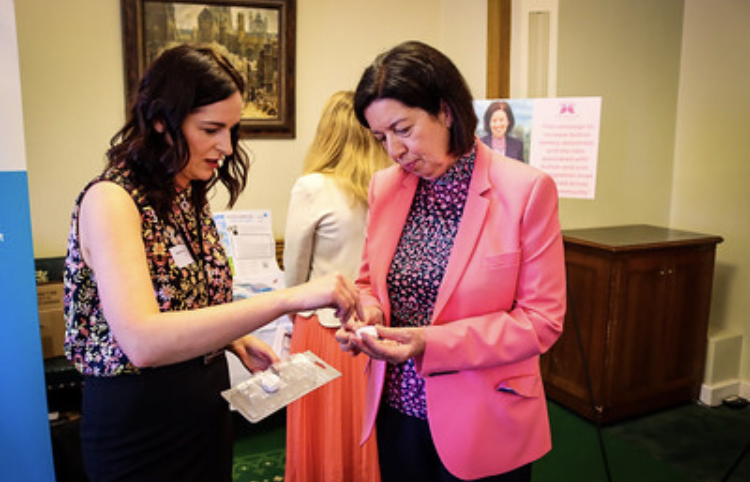 “It was attended by MPs, pediatric surgeons, healthcare workers and industry leaders, so it gave me an opportunity to speak to all the delegates, and show them some of the items that I had removed from sale that had unsecure battery compartments.

“I sit on the Consumer Public Interest Network and worked on the publicly available specification on button and coin cell batteries which was launched in April 2021, so I was able to bring awareness to that as well,” she added.

Jo Gideon MP said: “I was delighted to attend this event in Parliament to raise the profile of the work of the Harper-Lee Foundation, so that communities across the United Kingdom will become more aware of the danger of button battery ingestion.

“I signed a pledge to raise awareness in my constituency so that we can avoid more tragic deaths and injuries from button battery and coin cell ingestion by children.

“I am backing the campaign to raise awareness of the danger of button battery ingestion. Only through greater understanding can we prevent more accidents and deaths.”