A man and woman who falsely claimed equipment designed for use on horses could be used to detect breast cancer have been successfully prosecuted following a five-year investigation.

A pair of fraudsters who falsely claimed a thermal imaging device designed for use on horses could detect breast cancer in humans have been successfully prosecuted following a five-year investigation by Staffordshire County Council Trading Standards.

Sophie Gent, from East Norton in Leicestershire, had first been warned in October 2014 that the machine, known as a VET2000, was not suitable for use on humans. She had admitted offences concerning the promotion and use of the Digital Infrared Thermal Imaging (DITI) devices.

Operating from sole trader clinics, including in Liverpool, Gent claimed on her website that ‘DITI’ was capable of detecting breast abnormalities between eight and 20 years earlier than a mammogram could.

Businesses, including one in Newcastle-under-Lyme and another in Middlesbrough, were duped by Gent into investing around £20,000 each to set up screening clinics. 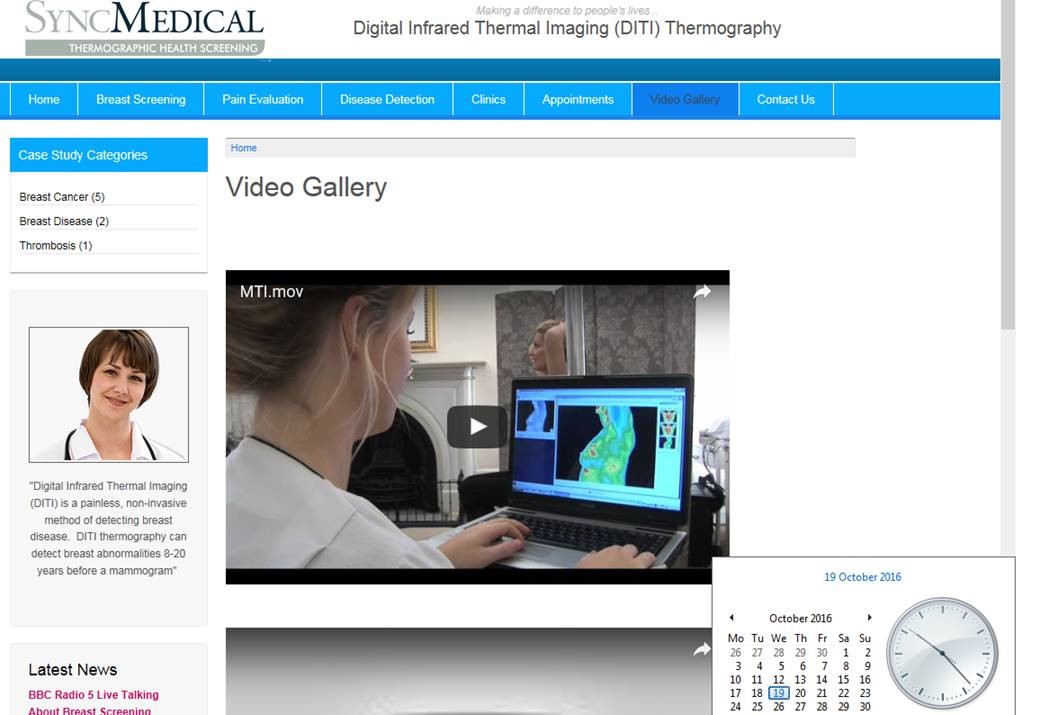 The Syncmedical website made false claims about the equipment’s efficacy

But despite the warning, Gent continued to advertise her screening services. She was sentenced on March 2 at Stoke-on-Trent Crown Court to 140 hours of community service and ordered to pay £3,800 in costs.

William Bradford, of Cambridge, was given a conditional discharge for 12 months and ordered to pay £2,950 costs after pleading guilty to falsely representing that a VET2000 could be used on humans, while he was training delegates to use the devices for breast cancer screening and other medical uses.

Gent would arrange for those who had purchased the VET2000 to be “medically trained” by Bradford, who had the UK sales rights for the VET2000 from its US manufacturers.

The court heard that Bradford acknowledged in later correspondence that the VET2000 was “basically unsuitable for human applications” for technical reasons that were not relevant when screening animals.

Gent and another of her businesses, Syncthermology Ltd, also pleaded guilty to fraud by false representation. In selling equine businesses training packages, at £5,000, with Gent’s consent or connivance, it was claimed that training courses were developed by, and screenings carried out by, the British College of Veterinary Thermography (BCVT). The court was told that the organisation didn’t exist.

Gill Heath, Staffordshire County Council’s Cabinet member for Communities, said: “This was an unusual and particularly challenging case for our trading standards team, but we’re pleased with the outcome.

“Not only did Gent dupe businesses into buying equipment that didn’t do its job, she put people’s lives at risk by falsely claiming to businesses and to customers at her own clinic that the equipment was suitable for breast screening for cancer when it clearly wasn’t.

“The really worrying thing about this case is that we have no idea how many people may have used these screening services, and now may be uncertain about the state of their health.”

Dianne Foulkes, of Newcastle-under-Lyme, also purchased one of the devices and carried out around 10 scans on women. She said: “I bought this equipment in good faith as it was sold as medically compliant. Once I became aware Ms Gent had made this claim falsely, I reported my concerns to the relevant authorities and wrote to my medical clients.”

Businesswoman Lisa Fisher, from Middlesbrough, purchased one of the devices but grew suspicious before she could use it for breast screening. She said: “I’m really pleased to hear that the dubious marketing and ‘business practices’ of Ms Gent have been investigated at length and proved fraudulent. She was incredibly convincing and persuasive and how she misled people was disgusting.

“I lost a significant amount of money investing in a ‘business package’ that proved to be fanciful at best and potentially harmful at worst.”

Gent was Managing Director of Syncthermology Ltd (formerly Equiscan Ltd). She also operated screening clinics as a sole trader under the names Syncmedical and Medical Thermal Imaging North West (MTi) from Liverpool and other cities in the North West.