A farmer from Herefordshire has received a custodial sentence for causing suffering to his livestock.

A farmer from Bringsty in Herefordshire has been jailed for 32 weeks and banned from keeping livestock following a prosecution brought by Herefordshire Council’s Trading Standards Animal Health team. 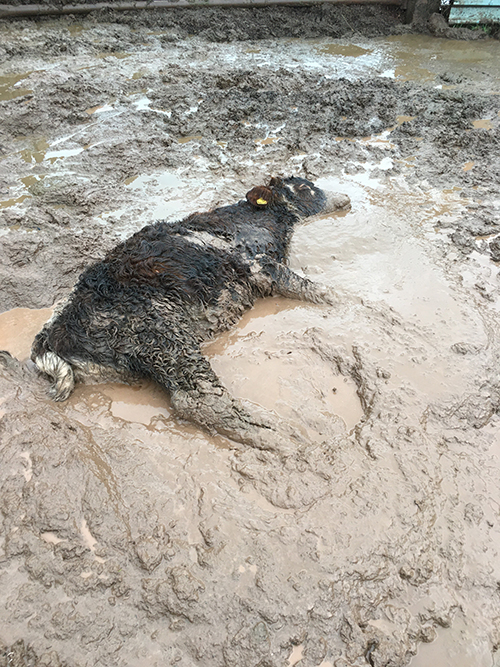 A calf found collapsed in mud had to be euthanised

After a three-day hearing Parry was sentenced to 32 weeks’ imprisonment with immediate effect, and was ordered to pay a victim surcharge of £122 and £5,000 towards costs. His disqualification from keeping livestock was increased from 10 years to life.

Following a tip-off, Animal Health officers found a calf collapsed in thigh-deep mud with muddy water running out of its nostrils. An Animal and Plant Health Agency (APHA) veterinary inspector concluded that the calf was suffering and beyond veterinary help, meaning it had to be euthanised.

The veterinary officer stated in court that during his 29 years of experience, this had been one of the most extreme, harrowing and distressing cases he had dealt with.

A further 50 cattle which were being kept in an unsuitable environment with an inadequate diet were seized.

Animal Health officers from both Herefordshire and Worcestershire councils, along with veterinary officers from the APHA, also found a sheep carcass in a decomposed state and more than 60 sheep being kept in such a way that they were exposed to pain, suffering and disease.

David Hough, Herefordshire Council’s Trading Standards Service Manager, said: “This is the worst case of animal suffering we remember the team having to deal with. The unfortunate calf had been slowly drowning in the mud and the other cattle were up to their bellies in mud with limited food and water. The complete lack of correct care and treatment of the cattle and sheep was deplorable.

“Herefordshire Council will continue to work with all livestock keepers to ensure that best practice is maintained on farms and small holdings, but we will not tolerate animal suffering and action will be taken against anyone who disregards the welfare of farmed animals.”