An operation involving Trading Standards has resulted in the seizure of £2.5m worth of counterfeit and unsafe products.

A joint operation between the National Trading Standards Regional Investigations Team Central England, Birmingham Trading Standards, West Midlands Police and partners including the Anti-Counterfeiting Group (ACG), the National Markets Group (NMG) and brand representatives, has resulted in the seizure of £2.5m worth of counterfeit and unsafe products including clothing, jewellery and cosmetics.

The warrants were connected to Operation Beorma, a joint National Trading Standards (NTS) and National Markets Group (NMG) operation to tackle the importation and supply of branded counterfeit and unsafe products. 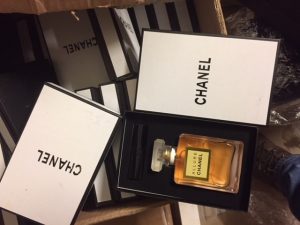 Four vans were also searched and a large amount of counterfeit goods seized, along with evidence of manufacturing labels and equipment. Of particular concern was the seizure of over 50,000 bottles of branded counterfeit perfumes (Chanel, Paco Rabanne, Armani) which the Officers believed to fail to comply with the Cosmetic Products Enforcement Regulations 2013.

Cllr Barbara Dring, Chair of Birmingham City Council’s’ Licensing and Public Protection Committee, said: “Trading Standards is completely focused on disrupting counterfeiting rings that fuel organised crime. Black market activities like these pose a serious threat to the British economy in terms of lost profits and tax revenues and may be linked to criminal activities such as child labour and modern-day slavery.

“Birmingham Trading Standards are warning consumers to be careful as while these products may be tempting and look like a bargain, they may be buying cheap, poor quality and potentially unsafe products – or paying the full price for inferior, fake merchandise.”

Graham Mogg, Anti-Counterfeiting Group Intelligence Co-ordinator and Chair of the National Markets Group, said: “This is an outstanding result and shows the benefit of a multi-agency partnership approach to removing counterfeit and unsafe goods off the streets of the UK. These products were destined for consumers visiting markets and car boot sales as well as those shopping online and on social media, and places them at risk of harm as well as undermining legitimate businesses.

“The ACG and our members are proud to be supporting Operation Beorma and are very grateful to Birmingham Trading Standards, the Regional Investigation Team and other partners involved in this operation.”

Lord Toby Harris, Chair of National Trading Standards said: “The seizure of such a significant amount of counterfeit and unsafe products is testament to the hard work and joint efforts of National Trading Standards and its partner agencies. “Many of these products were destined for sale online to unsuspecting members of the public. I would urge consumers to be vigilant, especially when purchasing from online marketplaces, and to look out for and report anything suspicious to the Citizens Advice Consumer Helpline, 03454 04 05 06.”