A business in Southall, West London, which stocked unlicensed and potentially dangerous erectile tablets and counterfeit goods has been fined £8,000 following a joint investigation by Ealing Trading Standards, the Anti-Counterfeiting Group and the Metropolitan Police.

Officers discovered 12,000 unlicensed erectile tablets and hundreds of Kamgra oral jelly sachets in a 12-foot shipping container leased by Ajmeet UK Ltd when they conducted an inspection as part of Operation Rowan in April last year.

None of the products had been cleared by the Medicines and Healthcare Products Regulatory Agency (MHRA), which regulates medicines and medical devices in the UK.

A large number of counterfeit ‘Jack Daniel’s’ and ‘BMW’ lighters, ‘Liverpool FC’ ashtrays and stickers bearing ‘Superman’ and other trade marked logos were also discovered during the raid. 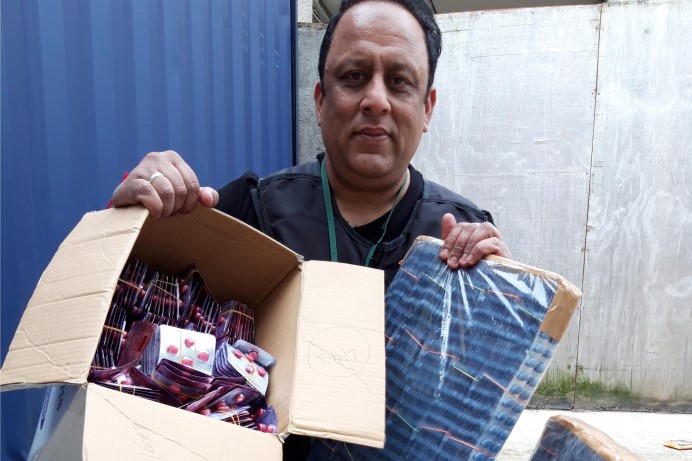 The company’s director and owner, Mano Singh Gaba, appeared for sentencing on July 7 at Uxbridge Magistrates Court. At the first hearing, Gaba had entered guilty pleas to all charges against him.

In addition to court costs of £1,000 and a victim surcharge of £162, Gaba was personally fined £1,615 and the company £3,000 for offences under the Consumer Protection from Unfair Trading Regulations 2008.

Councillor Bassam Mahfouz, cabinet member for decent living incomes said: “This is a fantastic result and shows great cooperation between our trading standards team and police.

“We have pledged to get tough on operators of bad businesses who flout the law and these actions have sent a warning to those who might try to profit by importing and selling illicit goods.

“This is a particularly horrendous case, where the trader acted callously; pumping potentially fatal unlicensed and unregulated medicines onto the streets.  Something, we’ve shown, we won’t stand for.”

Health experts have warned that taking counterfeit and unlicensed erectile dysfunctional tablets is particularly dangerous for anyone who is already taking prescribed medicines for liver, heart, kidney or blood pressure problems.

“We want to protect good, reputable traders whose livelihoods are put at risk and consumers whose health may be in danger.”